Bumped Back In Time By Penny Estelle 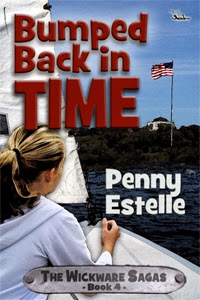 September 13, 2014, marks the 200th anniversary of the Battle of Fort McHenry and the writing of what would eventually become the United States’ national anthem, The Star Spangled Banner.

But once again, historians have left out some important information.  Sammy (Samantha) Brown, a 7th grader in Miss Wickware’s history class, played a key role in the whole process.  Without her, Mr. Key may have never been on the boat that gave him a bird’s eye view of the whole battle which prompted the famous poet to….maybe you just have to read the story yourself.

Bumped Back In Time Book 4 of The Wickware Sagas.  Take a look at

Excerpt
A full moon lit up the bedroom.  Sammy lay on the feather mattress in the dark, staring at the ceiling.  The window was wide open, a breeze stirring the curtains, though it did nothing to take away the mugginess of the night air.  The nightgown Sarah had given Sammy was drenched with sweat and it stuck to her like a second skin.

She got up and walked to the balcony.  Dr. Beanes had been right about his wife.  Sarah had sat Sammy down and got her a bowl of left over wild turkey and boiled sweet potatoes, which she inhaled.

The older woman tisked her tongue and her head shook in sympathy, distressed at the poor girl’s story.  “Your mother must be worried beyond belief,” Sarah said.

“Oh, I’m sure she’s freaking out all over the place,” Sammy snorted.  “And like she’ll ever buy this story!”

“I don’t understand.  You write stories to sell to your freakish mother?”

Sammy had to chuckle at that one. “No.  She’s just going to kill me.”

Outraged, the woman came to her feet.  “She will do no such thing.  William will make sure that you are safe!”

Staring into the night, Sammy smiled at the memory.  She had assured Sarah it was only a saying, but the woman did not seem convinced.

The sound of horses, riding up to the Beanes’ home, brought Sammy out of her reverie.  At least ten men, all in red coats, jumped off their horses and headed toward the house.
A serving girl tapped on Sammy’s door before opening it.  “Please ma’am, Mistress Beanes would like you to come to her room, quickly.”  She turned to lead the way without waiting for a reply, Sammy, hurrying to catch up.

The scene that greeted Sammy when the bedroom opened had the hairs on the back of her neck, not only standing straight out at attention, but screaming “run…hide…wake up!”  Goose bumps broke out on her sweaty body.

Dr. Beanes was sitting on a chair putting on his shoes while Sarah was wringing her hands and pale as the snow-white nightgown she was wearing.

Before Sammy could utter a word a BANG BANG BANG came from the door downstairs and that’s when all hell broke loose!

Thanks to everybody for stopping by to take a look.  Bumped Back in Time is the fourth story in the Wickware Sagas.  There are five all together.

These are all short, time travel adventures involving seventh graders in Miss Wickware’s history class.  They must draw a name from a box and do an oral report.  SOMEHOW, they end up back in time to get up close and personal with their drawn subject!

I also have a printed version of the Wickware Sagas.  This can be found at
http://www.amazon.com/The-Wickware-Sagas-Penny-Estelle/dp/1499179502

Due to the 200th anniversary of The Star Spangled Banner, MuseItUp is offering Bumped Back in Time for 99 cents for the first two weeks in September.  Check it out at


https://museituppublishing.com/bookstore2/index.php?option=com_content&view=article&id=146&Itemid=82
Posted by Kay LaLone at 2:30 AM