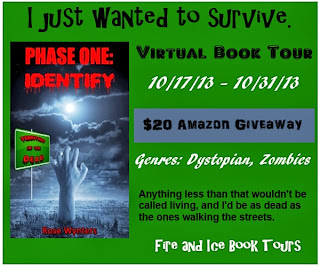 Phase One: Identify (Book 1, Territory Of The Dead) by Rose Wynters

A letter found on the clear glass case of the only gun shop in Pleasant, LA

My name is Tabitha Alexanders. Congratulations. If you're reading this letter, you're one of the survivors from the zombie apocalypse. Take care, or you won't last for long.

I'm 18 and just graduated this year. I didn't get to enjoy it, though. I was working at the grocery store as a checkout girl when the first body slammed against the clear glass. I'll never forget the fear that washed over me at the sight of his red, hungry eyes. That night marked the loss of my innocence.... And my freedom.

Now my life is something different. No longer can we take the basic things like safety and food for granted, not to mention our lives. The zombies destroyed our entire town that first night, including the family of the college guy I had a crush on in the past. We were able to save him, but he's not the same. He's different, but so am I.

Our numbers are extremely small, but the humans have united. A new group of survivors is emerging in this nightmarish world.... And we aren't afraid to fight dirty if it ensures our survival.

We had to leave Pleasant in order to save our lives. We barely made it out alive. These zombies are entirely different than the way I'd always seen on television. They are fast, preternaturally strong, and even aware. They used that awareness to discover our small group of survivors hidden within our home. If it wasn't for Kellan we'd be dead right now, wandering the streets of Pleasant.

Kellan is something completely different than any man I've ever seen before. He's too powerful and too controlled to ever be anything like the average male. I can't explain him, but I'm glad he's on our side. Heaven help us all if he ever decides we're not worth the effort.

He's taken us to his home outside of town, if the massive fortress can be considered that. It's large enough for many more than us, self-sustaining should we be forced to remain beyond the high fence. There's something strange about the way he was so prepared for the zombie apocalypse, but it's not my place to question it. I've learned that Kellan doesn't enjoy questions, and he doesn't want anybody getting too close.

I'm leaving a handwritten map here in the hopes that there is still someone alive in this town to find it. God, I hope you are. It feels like we're the only ones left, and it's horrifying... 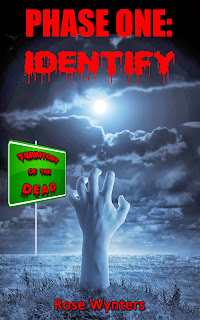 The reporter looked to be somewhere around his early 30's. His handsome face was pale and drawn, his expression frantic. It was soon apparent he wasn't working from any type of script, as he addressed the viewers that were watching. “The police department is urging residents to stay inside and lock your doors, and stay away from what people are classifying as zombies.”

Somebody cried out loudly in the background, but the reporter continued, “Police have no idea what what the death toll is. Numerous attacks have been reported. Do not get close to anyone that appears to be injured in anyway.”

A woman moved in front of the camera, pushing the reporter out of the way with her body, before grabbing the microphone from his slack grip. Her face was pale, but her dark eyes were filled with determination as she stared into the lens. She got right to the point.

“Don't let this reporter sugarcoat this with his evasions. There are dead people walking out there, and they are fast, deadly, and supernaturally strong. There is a name for them, one we've heard before but thought was only fiction. These dead people are zombies, and they don't care about nothing but getting their teeth into your flesh.”

The reporter tried to grab the microphone back, but she shot him a deadly look. “You're not getting this till I'm done,” she told him in a firm voice. “I'm not gonna stand by while you get your five seconds of fame and leave these innocent people out there to die. People deserve to know what they are up against, and how to protect themselves. Now back off.” Surprisingly, he stood still and listened.

She turned back to the camera. “I know there are some of you out there that don't believe in this. You wanna box it all up, neat and tidy-like, and believe that there must be some rational explanation for this, and come morning it will all be gone. If you believe that though, you're going to find yourself dead before the sun ever hits the sky tomorrow.”

She leaned into the camera, and I felt as if she were talking directly to me. “For those of you that want to live though, listen and listen well. These zombies aren't the slow, dumb creatures we have all seen on film. These zombies are fast, faster than we are. The more they eat, the stronger they seem to get. The ones I have seen tonight have red eyes as well. The only way to kill them is by shooting them in the head or cutting their head off.”

“I object to that,” the reporter broke in, his voice loud enough for us to hear him. He shook his head at the woman, his expression angry. “I simply can't tolerate you suggesting to viewers to go out and murder these people. We don't know what's wrong with them, maybe they are just ill.”

She looked back at him in disbelief. “So how many people have you ate the last time you felt ill, Mr. big time, know-it-all reporter? I'll tell you what. Since you're so concerned with saving the zombies that wouldn't think twice about killing you, why don't you go out there and show us what you've got? I'm sure your cameraman here would be only to happy to film you through the window when you become dinner.”

The reporter smirked at her before eying her with disdain. “What makes you such an expert?”

She ignored him, turning her attention back to the viewers. “If you're still alive and hearing this, I beg you to listen. I've never seen anything like this before. Tonight I lost my whole family to these animals. If you want to stay alive, be cautious.

Don't go out unarmed, and don't go out alone. If it's safe, try to make it to the police station. These zombies are everywhere now, and I guarantee the dead are outnumbering the living. Try to not join their ranks.”

She turned back to the reporter, holding out the microphone. “I'm not an expert, I'm a survivor. I hope you can learn how to be one yourself.”

With that, she turned and walked away.

Rose Wynters is the paranormal romance author of six books and three series, including the bestselling series, Wolf Town Guardians.

When not writing about hot, alpha characters and unique heroines, she enjoys pulling her head out of the fantasy world by traveling, camping, and experiencing new adventures.

A lifelong fan of both the paranormal and romance, she loves developing plots that combine these into sizzling hot reads with an exciting, sexy hero.

Facebook https://www.facebook.com/rose.wynters.5
a Rafflecopter giveaway
Posted by Kay LaLone at 2:30 AM No comments: 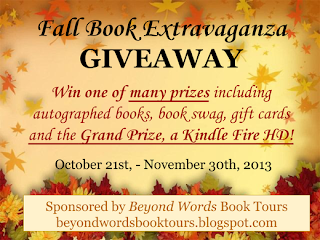 We are excited to announce that this is our first year hosting the Fall Book Extravaganza Giveaway and we had 25 awesome authors and book bloggers sponsor over 55 prizes, including a Kindle Fire! Below you will find a Rafflecopter where you can enter to win one of these FABULOUS PRIZES!
GRAND PRIZE: Kindle Fire HD

(2) Signed Copies of If the World Ended, Would I Notice
by  Erika Hammerschmidt

(5) Crash and Burn
by Chelsea Camaron

The Chosen
by  Annette Gisby

New Zealand with a Hobbit Botherer
by  Annette Gisby

(3) Through the Crimson Mirror
by Daniel Alexander

SEE ME
by Natalie-Nicole Bates

Remember the Stars
by  Natalie-Nicole Bates

(2) If the World Ended, Would I Notice?
by  Erika Hammerschmidt

(3) Beyond the Winner's Circle
by Sutton Fox

You can find more information about the great
authors & bloggers who made this giveaway possible at:
Beyond Words Book Tours
Posted by Kay LaLone at 1:03 PM No comments: