My Review Of Lure By Tarynn Kerr 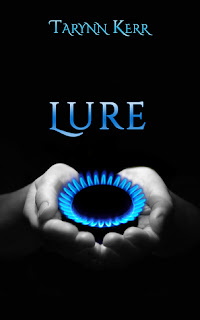 David was looking forward to doing some hiking on his family camping trip. That is, until he’s lured into another world. Now he has to hike through the fae world, where fairies, hellhounds, and all sorts of magical creatures are lying in wait. These aren’t nice, fairytale creatures. No, everything here seems determined to kill David and his family. He has to escape this dangerous realm, but the one fairy that can help him may be the one that keeps him here

My Review:  I loved this book. I love to read books where the characters come alive on the page so that is one reason why I enjoyed reading this book. David doesn't realize the world he will enter when he meets a stranger who invites him to hike on a trail. Secret. Danger. Adventure. I want to read the next book.
Posted by Kay LaLone at 4:14 PM No comments:

My Review Of Bubbles Big Stink In Frog Pond

Title: Bubbles: Big Stink in Frog Pond | Author: Ben Woodard | Illustrator: Fran Riddell | Publication Date: June 15, 2015 | Publisher: Miller-Martin Press | Pages: 32 | Recommended Ages: 3 to 7 Book Description: Bubbles is causing a stink. And the other frogs are not happy. Theytell him to stop bubbling the water or he'll have to leave Frog Pond. But he can't help it. He's been bubbling since he was a little tadpole. Will Bubbles have to leave Frog Pond? Where will he go? And what happens when danger comes? Find out in this fun picture book about friendship and self-respect for preschoolers and all ages.

My Review: I loved this cute, funny story. Bubbles can sure stink up the pond. His friends don't want him around any more. But stinking up the pond makes Bubbles a hero when he saves his friends. So when Bubbles gets too stinky, they send him to Bubble Zone.

About the Author: Ben Woodard

A spellbinding storyteller of high adventure, Ben Woodard has walked the Great Wall of China, hiked in Tibet, and climbed to 18,000 feet on Mt. Everest. And recently learned to surf in Hawaii. Ben is active in SCBWI and a member of a local children's writing critique group. He is a former Marketing Manager for a major corporation and ran his own marketing consulting business. He started writing children's stories in 2008 and has written picture books, middle grade and young adult. Stories of adventure and wonder. Stories that inspire and educate, and, most of all, entertain. Ben lives in Kentucky with his wife Lynda.

My Review Of Frankie Dupont And The Lemon Festival Fiasco

Title: Frankie Dupont and The Lemon Festival Fiasco | Author: Julie Anne Grasso | Illustrator: Alexander Avellino | Publication Date: March 29, 2015 | Publisher: Independent | Pages: 100 | Recommended Ages: 8 to 12 Summary: Hot off cracking his first official case, Frankie Dupont is on the scene when his new teacher takes ill. The pint-sized detective suspects a classic case of sour grapes, but the evidence leads him to the one place he wouldn’t mind avoiding for the rest of his natural life. Enderby Manor has a few more secrets up her sleeve, and as Frankie begins to unravel them, he uncovers a plot stinkier than a sardine sandwich. In Book 2 of the Frankie Dupont Mysteries, Frankie will make some new friends, upset some old ones, and of course, there will be lemon meringue pie.

Haven't read Book 1 yet? Click on the cover below to grab a copy of "Frankie Dupont and the Mystery of Enderby Manor".


Early Buzz About the Book

"This is a wonderful book 2 in the Frankie Dupont series. Just be forewarned that you will want lemon pie and lemonade after reading! The Lemon Festival Fiasco has multiple suspects and red herring clues to follow and solve while reading. Twists and turns will keep young readers engaged and thinking. This would be a perfect read for gifted education classes. Characters to love, and plenty of action! " ~ 5 Star, Carolyn W., Amazon

About the Author: Julie Anne Grasso

With a background in paediatric nursing, Julie Anne Grasso spent many years literally wrapping children incotton wool. Every day she witnessed courage and resilience from the tiny people she cared for, which inspired her to write stories to entertain them. A science fiction nerd (she even owns a TARDIS), cupcake enthusiast and lover of all things mystery, she lives in Melbourne with her husband Danny and their little girl Giselle. Most days she can be found sipping chai tea and dreaming up wonderful worlds that often involve consumption of cupcakes.

My Review: Frankie is such a fun character. Sometimes he makes me laugh. Frankie is a detective who loves to solve mysteries. Did Miss Chestnut really poison Mr. Mulberry? If she didn't, than who did? Frankie goes through his list of suspects. Looks for clues. Finally he solves the mystery.
Posted by Kay LaLone at 2:30 AM No comments:

Mother Daughter Book Reviews is pleased to be coordinating a Book Blast for the picture book "Luna's Lost Ball" by R.A. Milnes II (June 18 to 20, 2015).

Title: Luna's Lost Ball (Shiloh and Friends | Author: R.A. Milnes II | Publication Date: April 30, 2015 | Publisher: Independent | Pages: 36 | Recommended Ages: 3 to 8 Summary: Luna is a Labrador retriever and she has lost her most favorite ball. Follow Shiloh and her friends in a tale of friendship, teamwork, sharing, and reward as they help Luna find her lost ball.


The Buzz About the Book

"Wonderful book for small children! My twins are 4 years old and loved the story and colorful backgrounds! We are anxiously waiting the next in the collection!" ~ Marianne H., Amazon

About the Author: R.A. Milnes II

I am a business professional working in the healthcare industry. Luna's Lost Ball began as a gift to my niece and nephew. I have such love for them that I wanted to give them something that they can hold on to. The beauty of this work is that I am able to incorporate my dogs, Shiloh and Luna, into telling a story of friendship, teamwork, sharing, and reward. I hope that you enjoy this story and it brings your family joy each time you read it. My goal is to continue to write more stories under the Shiloh and Friends brand.

Prize: $25 Amazon Gift Card or PayPal cash (winner’s choice) Giveaway ends: July 2, 11:59 pm, 2015 Open: Internationally How to enter: Please enter using the Rafflecopter widget below. Terms and Conditions: NO PURCHASE NECESSARY TO ENTER OR WIN. VOID WHERE PROHIBITED BY LAW. A winner will be randomly drawn through the Rafflecopter widget and will be contacted by email within 48 hours after the giveaway ends. The winner will then have 72 hours to respond. If the winner does not respond within 72 hours, a new draw will take place for a new winner. Odds of winning will vary depending on the number of eligible entries received. This contest is in no way sponsored, endorsed or administered by, or associated with Facebook. This giveaway is sponsored by the author, R.A. Milnes II and is hosted and managed by Renee from Mother Daughter Book Reviews. If you have any additional questions – feel free to send and email to Renee(at)MotherDaughterBookReviews(dot)com. a Rafflecopter giveaway

My Review Of Billy Bobble Makes a Magic Wand 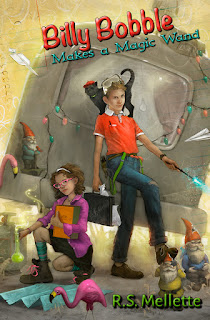 Title: Billy Bobble Makes a Magic Wand | Author: R.S. Mellette | Publication Date: December 8, 2014 |Publisher: Elephant’s Bookshelf Press | Pages: 284 | Recommended Ages: 10+
Book Description: “E = mc2 is no longer the most powerful force in the universe. Your wand is.” Twelve-year-old Billy Bobble and his best friend Suzy Quinofski didn’t mean to change the universe. Billy, a quantum physics prodigy, just wanted to find a way to help his hoarding, schizophrenic mother – and maybe impress a coven of older girls in high school. Suzy, his intellectual equal, wanted to help her friend and cling to her last remnant of childhood, a belief in magic. Together they made Billy a real, working, magic wand, and opened a door to the Quantum World where thoughts create reality, and all things – good and bad – are possible.

“What a great read! I must have been under a magic spell reading it – read it in one day, which I only do if the book is very good. I encourage all readers to pick up this book and spend an afternoon with the quantum-physics-knowing, often-bullied, lovable Billy Bobble and his intellectual equal, best friend Suzy Quinofski.” ~ Books4theSoul, Amazon
“My inner geek smiled a lot while reading this book. Theories and ideas I had never heard of flew over my head… but at every mention, I grinned. I LOVE a book that tackles tough subjects, embellishes them and embraces it. These characters aren’t afraid of challenges, facing a bunch both personally and scientifically.” ~ Kirstin, Amazon
“I think that this is a great book and I think that kids will like it a lot, because I did!” ~ Alec S., Amazon
My Review:  Great, smart characters. Billy and Suzy don't quite fit in at school. They are smarter than most kids. Billy doesn't mean to get into trouble, but he does. That trouble leads him on an exciting, magical adventure. It pays to be smart when you can invent a magical wand.

Billy Bobble Makes A Magic Wand, is R.S. Mellette’s debut novel from Elephant Bookshelf’s Press. Prior to Billy Bobble, Mellette had Sci-Fi short stories published in the anthologies: The Fall: Tales from the Apocalypse, Spring Fevers and Summer’s Edge. Mellette is an Associate Director of Dances With Films (one of MovieMaker Magazine’s top 25 coolest film festivals in the world). He wrote and directed the multi-festival winner, Jacks or Better. He also wrote the first web-to-television intellectual property, “The Xena Scrolls,” for Universal Studio’s Xena: Warrior Princess. On Blue Crush and Nutty Professor II he served as script coordinator. He’s acted in Looney Tunes: Back In Action, Star Trek: Enterprise, Days of Our Lives, Too Young The Hero, and countless stage productions across the US.
Mellette is a member of the Science Fiction Writers of American and a regional board member of the Society of Children’s Book Writers and Illustrators.
Posted by Kay LaLone at 2:30 AM 1 comment: