School Of Deaths By Christopher Mannino 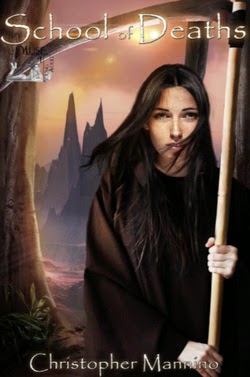 EXCERPT
An enormous white wolf with blood-red eyes snarled at her. Suzie screamed.
The walls closed in and the wolf pounced. She ran.
Her body still ached with pain, but her heart thundered in her chest, pounding with complete fear. The wolf howled and another white wolf appeared, with the same blood-red eyes. She sprinted away.
She didn’t remember going outside, but the walls were trees. The trees grew dense, a forest closing in. She ran and ran, faster and faster. The wolves howled behind her. More white wolves lurked ahead.
Wolves everywhere. Far behind her, she heard Luc laughing.
One of the bone-white wolves snarled and leapt for her throat. She fell back and rolled. The wolf turned toward her and vanished.
A massive white cobra with blood-red eyes hissed at her. She scrambled to her feet and ran again. Panting hard, her legs in agony, she couldn’t think. Her only emotion was fear. Fear surged through her body, giving fleeting strength to her aching legs.
The ground opened and she fell. Down and down until she landed hard on something moving. Spiders. Thousands of bone-white spiders with tiny red eyes. Crawling. She screamed until the sound caught in her throat.
The cobra re-emerged, hissing.
Suddenly she understood. The cobra hissed at her again, its red eyes glaring at her.
“You’re a ’Mental, aren’t you?” she asked the giant snake.
Luc yelled something behind her. The snake vanished.
For a strange moment, the world cleared. Suzie looked around. The Ring of Scythes surrounding the College stood in the distance. She had run away from the school and collapsed in a field. Behind her, a real forest loomed.
“Not me, you imbecile, her.” screamed Luc. His dark face tightened, and he yelled at some invisible threat. The albino man, the ’Mental, stood near him. Luc yelled in terror and ran back toward the College.
The albino turned toward Suzie.
At once all sensation was gone. This time she didn’t see wolves, snakes, pits, or spiders. This time, she saw nothing.
The attack was swift and precise, cutting her deeper than a scythe.
Fear.
Pure, unfettered fear. Fear deeper than terror, darker than nightmares. Fear filled with horrors, too terrible to deny.
Fear swept through every cell in her body.
Suzie tried to fight. She tried to scream. Finally, she started to run again. She ran into the forest, tripping over roots. The albino followed her, and the forest darkened.
Crows cawed at her. If she turned, they’d attack. The trees reached down to grab her, but Suzie ran until she reached the other side of the woods. She collapsed.
Deep in the forest, far behind her, someone was crying.
BLURB:
Thrust into a world of men, can a timid girl find bravery as the first female Death?
Thirteen-year-old Suzie Sarnio always believed the Grim Reaper was a fairy tale image of a skeleton with a scythe. Now, forced to enter the College of Deaths, she finds herself training to bring souls from the Living World to the Hereafter. The task is demanding enough, but as the only female in the all-male College, she quickly becomes a target. Attacked by both classmates and strangers, Suzie is alone in a world where even her teachers want her to fail.
Scythes hungry for souls, Deaths who enslave a race of mysterious magicians, and echoes of an ancient war with Dragons.
As her year progresses, Suzie suspects her presence isn't an accident. She uncovers a plot to overthrow the World of Deaths. Now she must also discover the reason she's been brought there: the first female Death in a million years.
NOW AVAILABLE IN EBOOK AND COMING THIS WINTER TO PRINT
http://www.ChristopherMannino.com 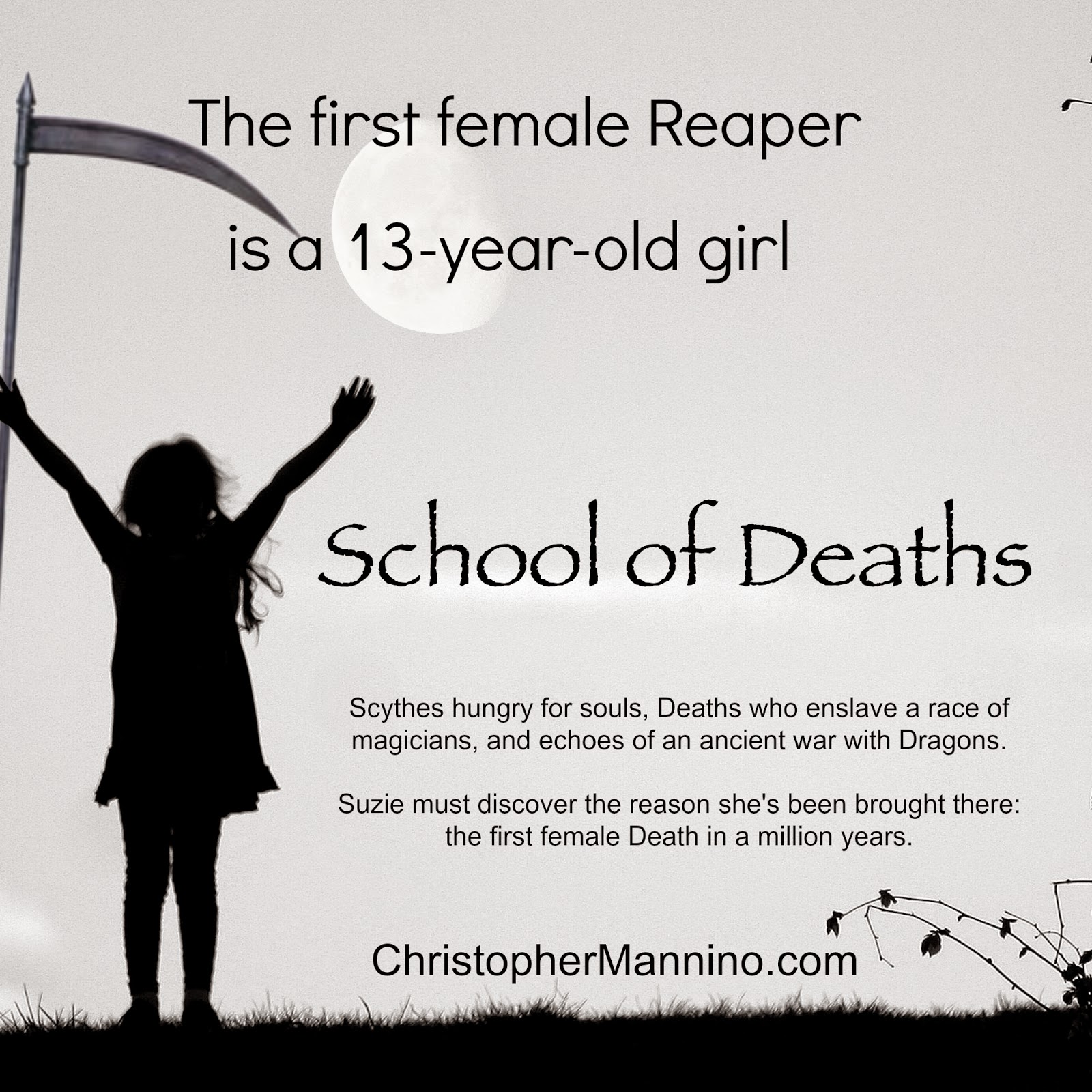