Dangerous Indenture By Kelli A. Wilkins 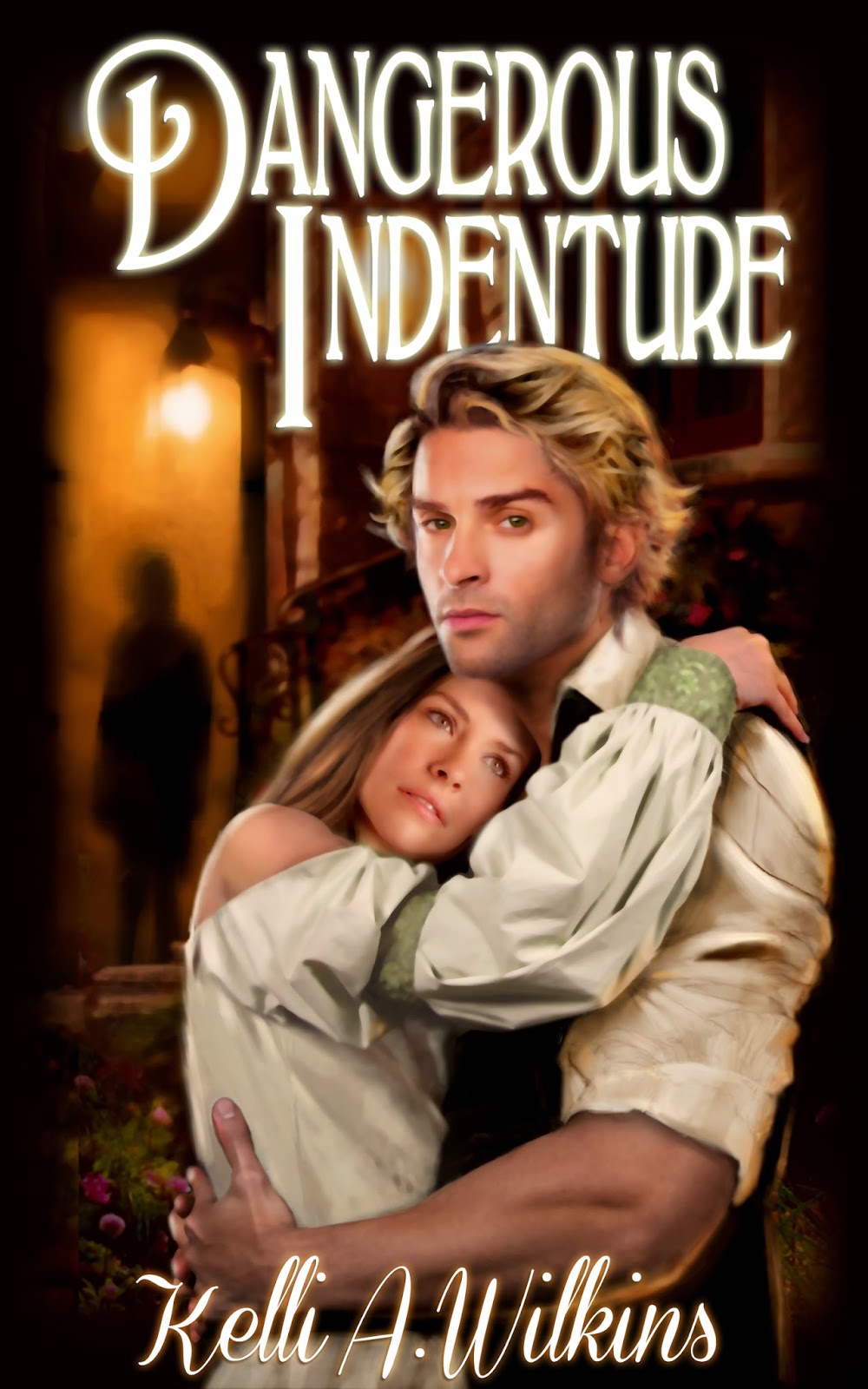 Hi everyone!
Today I’m sharing an inside look and an excerpt from one of my latest historical romances, Dangerous Indenture. In my next guest blog, I’ll share an inside look at my other historical romance, Wilderness Bride.
Although both books are historicals, they’re very different. Wilderness Bride is a traditional historical that takes place in the wilds of the Michigan Territory in the early 1800s. Dangerous Indenture is a spicy historical/mystery set in Pennsylvania Colony in the early 1700s. Here’s the summary:

Eager to escape her past in Ireland, Shauna Farrow signs on to become an indentured servant to Joshua Stewart, a wealthy man in Pennsylvania Colony.
But a life of servitude quickly turns to drudgery, and her hopes for starting over and creating a better life for herself are waning—until she meets her master’s roguish son, Ashton.
Shauna fights her growing attraction to Ashton, torn between propriety and acting on her emotions. But amidst their flirting, something dark stirs. Shauna soon discovers why no other servants will work for the strange Stewart family.
Stewart House has an unsavory reputation: a previous servant died there under mysterious circumstances. When another servant goes missing in the middle of the night, Shauna is convinced that a member of the family is responsible.
When Shauna’s investigation leads her too close to the truth, it’s up to Ashton to save her before time runs out.

***
So, how did the book come about? Dangerous Indenture is one of those books that just jumped into my head. (Yes, every so often that happens to writers.) One day, I overheard the name Shawna Farrell, but I thought I’d heard Shauna Farrow. The name stuck with me and I wrote it down. A few minutes later, I knew all about her: she was an Irish indentured servant who came to Pennsylvania Colony and worked at a house where a previous servant was murdered. Once I knew that, I started outlining the book.
Before I wrote a word, I did a lot of research. I was starting from a good place with the book – I knew where I wanted to set the story and in approximately what time frame it should take place. From there, I spent time in the library going through history books, reading up on Colonial times (What life was like, What people wore, ate, etc.) and indentured servants in general (Where did they come from? Why did they leave their home country?). As I wrote the book, I incorporated my research as background information. This gives the story a rich historical feel without going overboard with details that might bog down the book or be of no interest to readers.
I especially enjoyed creating the characters and setting the stage for the drama that’s about to unfold. Right from the start, we’re told that Stewart House is haunted, and then we (and Shauna) meet the master of the house, Joshua Stewart, and his strange family. When I developed the secondary characters, I made sure to give them all interesting backstories and unusual quirks. Joshua comes off as a mean bear of a man, Minerva just might be crazy (and a murderer), Colin is… a villain in many senses of the word, and Lila thought she had everything going for her – for a while.
Shauna and Ashton (our heroine and hero) are not entirely innocent and without flaws. They each have sordid pasts, wicked desires, and are not afraid to stand up for themselves – and each other.
I love the characters, the setting, and the fact that Dangerous Indenture is a romance blended with mystery. I had never written a romance set in Colonial times before, and mixing romance with suspense/mystery to make a Gothic-type story was a lot of fun.
I hope you’ll check it out. Here’s a steamy mini-excerpt:
Excerpt:
Ashton wrapped his arms around her. “Come here. Let me hold you.”

She relaxed against him, and her worries drained away. A familiar heat built between her legs as Ashton leaned forward and kissed her. Ashton moaned, and she felt a hardness jutting out from the front of his breeches.

Her mind flashed back to Ashton in his robe. His chest, his flat stomach, the glimpse of a tiny trail of hairs leading lower... What would Ashton do if he knew how desperately she craved his touch?

She fought the urge to slide her hands to the front of his breeches and stroke him, make him ready. What would it feel like to make love to him? She ached to be crushed under his body as he entered her and—

Without warning, Ashton pulled away.

“Forgive me,” he said, releasing her. “I tend to lose control and let my urges take over. I’m not used to being around a decent woman.”

He thought she was decent? That was a joke. If he knew what wicked ideas were swirling through her head, he’d probably faint.
***
Dangerous Indenture is available from:
Amazon: http://www.amazon.com/Dangerous-Indenture-Kelli-Wilkins-ebook/dp/B00JMHZNIG/ref=sr_1_1?s=books&ie=UTF8&qid=1398257669&sr=1-1&keywords=dangerous+indenture

ABOUT KELLI A. WILKINS
Kelli A. Wilkins is an award-winning author who has published more than 90 short stories, 18 romance novels, and 4 non-fiction books. Her romances span many genres and heat levels. Kelli had three romances published in 2014: A Secret Match, Wilderness Bride, and Dangerous Indenture. Look for her story, “Home for Halloween” in the Moon Shadows horror anthology here: http://www.amazon.com/dp/B00N232UEG

Kelli publishes a blog: (http://kelliwilkinsauthor.blogspot.com) filled with excerpts, interviews, writing prompts, and whatever else pops into her head. She also writes a monthly newsletter, Kelli's Quill, and posts on Facebook and Twitter. Kelli invites readers to visit her website, http://www.KelliWilkins.com to learn more about all of her writings.