My Review Of Wystan By Allison Merritt 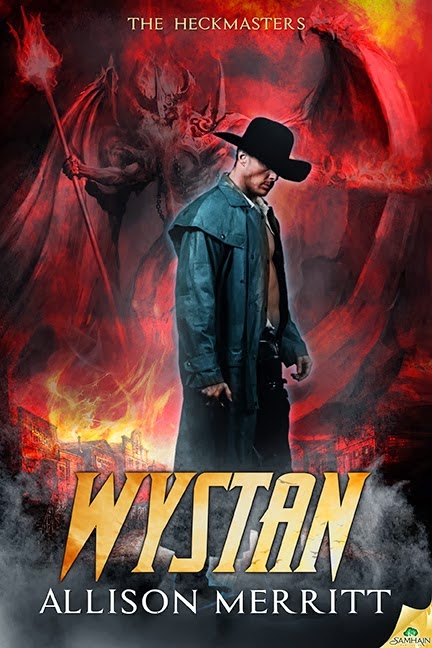 Blurb:
Her search for safety lands her in a totally new kind of danger.

Certain that an ad for a job in a small New Mexico Territory town is the answer to her prayers, Nebraska schoolteacher Rhia Duke packs her sister into a rickety wagon and heads west.

Except when they reach the near-deserted town, she learns the truth. There is no job, no future, and no welcome in the bleak blue eyes of the handsome sheriff.

The minute Rhia’s runaway team thunders into town, Wystan Heckmaster feels the change in the air. One of three sons of a demon who dared love a human, he keeps watch over a Pit guarded by seven seals, and slays any Hellbound demon that attempts to free the master imprisoned within.

With a gut full of regret and a forgotten town filled with reformed demons, Wystan is certain of one thing: he can’t be the man Rhia needs. But when the truth behind Rhia’s flight from Nebraska comes to light, Wystan must open his soul—and pray there’s enough love between them to overcome the darkness rising from the Pit.

Warning: Contains a take-no-prisoners sheriff, a woman who can’t outrun her supernatural secrets, and a dusty town where hope is as thin as dust in the wind. Author recommends keeping a glass of cool spring water at your elbow while reading.

Excerpt:
Something changed in the air the moment the wagon crossed the town’s border. Too
early to be a supply train, and there was no way in hell it was visitors. Berner didn’t host
town fairs, theatre troupes, peddlers, or bible thumpers.
Wystan Heckmaster slapped his battered Stetson on his head, collected the keys to the
jail, then stepped out the door. The first thing he saw was a pretty woman with hair the color
of maple sugar—a rich brownish-blonde. The frown on her face spoke volumes, and the air
around her pronounced trouble. She made a straight path for him.
“Mr. Heckmaster. Or should I call you Sheriff? Or Mayor? I need to discuss the ad in
the Lancaster County Republican with you. Someone placed an ad, but your brother tells me
there is no school here. I’m sure there has to be a mistake. There’s only one Berner in New
Mexico Territory. I’m very capable at reading maps. If I wasn’t, I would be ashamed to call
myself a teacher.”
He doubted she had taken more than two or three breaths during the speech. If she
made talking in rambling paragraphs a habit, no wonder she looked so peaked.
“Teacher?” He glanced along the street, but it was deserted as usual. “Lady, we don’t
have a school here. Certainly no need of a teacher.”
Her hands balled into fists that settled on her hips. The dress she wore was patched—
the egg yolk yellow faded into something even more disgusting. It had little flowers dotting
the material, but they looked as worn as her scuffed black boots.
“Then what was the purpose of placing an ad in the Lancaster County Republican?”
She spoke with the fierceness of a mama bear warning predators away from her cubs.
Wystan reached into his shirt pocket and drew out a toothpick.
“I didn’t place any ad in any Lancaster County anything.” He looked past her, expecting
Eban to saunter up the street. Eban had to be the brother she’d referred to since Tell was still
on the trail.
“Someone did,” she insisted. She fished a crumpled and much-folded piece of newsprint
out of the pocket hidden by the folds of her skirt. “See? Right here it says, ‘School teacher
wanted for spring term at Berner Schoolhouse. Wages paid based on experience. Room and
board provided. Apply in person at City Hall, Berner, New Mexico Territory.’ I’m sure my
eyes don’t deceive me.”
Wystan stared at the clipping, then back at the woman. A galaxy of freckles spattered
across her nose and cheekbones, making her look younger than her eyes said she was. Full
figured and sure as shittin’ a grown woman. The wariness and worry darkening her hazel
eyes gave her away as one with a lot of trouble on her plate.
“I can read.”
She pulled the ad away from his face, folded it, and returned it to her pocket. “Where
would you suggest I look for an explanation, Mr. Heckmaster?”
Fussy little thing. “I assure you that no one in this town did. There’s been a mistake.
Sorry to inconvenience you, Miss Schoolteacher. Now turn around and head home.”
A flush colored her cheeks. “I can’t head home! I have no home to return to. My little
sister and my friend are waiting at the doctor’s office for me to straighten this mess out. The
ad says that room and board will be provided. I’d expected to move into a room, sir.”
“You left them with Eban?” That explained his absence.
“Beryl is ill, Sheriff. This is the first town we’ve seen in days and it was past time for her
to get some attention.” Despair crept into her voice.
Wystan shifted his weight and transferred the toothpick to the other side of his mouth.
“Eban’s not exactly trained in human medicine.”
The woman’s mouth opened into an O. She shook her head and seemed to regain her
senses. “He’s a veterinarian? He seemed certain he could help Beryl.”
Wystan cleared his throat. “Sure, animal doctor. I’m sorry for your misfortune, lady,
but as you can see, Berner’s about run into the ground. There’s nothing here for you or your
friend. Might be best to move along.”
She seemed to deflate. “Move along.” Her lips moved, softly forming the words, but it
was as though she didn’t comprehend them. “We’ll move along, right down the trail into the
next town where there won’t be any teaching jobs either. Sylvie, Beryl, and I will starve to
death on the side of the road with no one in the world to care.”

My Review: I love reading supernatural books. So I really loved reading this book. Allison Merritt weaves a supernatural tale. Rhia travels to a New Mexico town to become a school teacher, but the town is not what she expected. In the town lives reformed demons and the good looking sheriff, Wystan, kills demons who try to escape the pit. Demons. Friends. Love. Characters you can connect with. Thank you, Allison, for a good read. 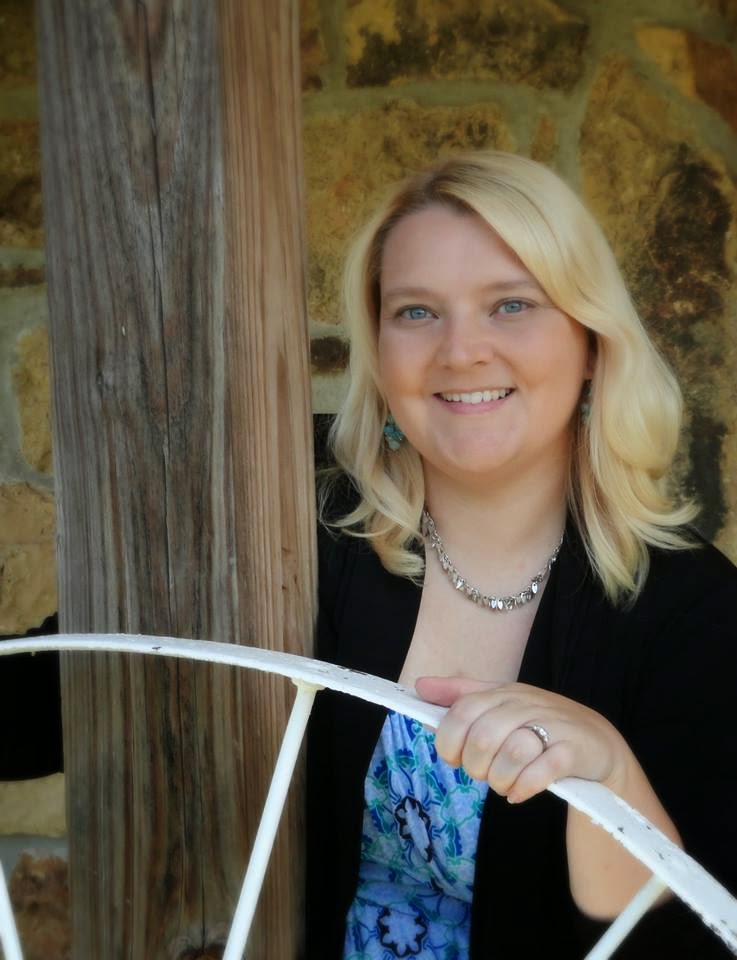 About the Author:
A love of reading inspired Allison Merritt to pursue her dream of becoming an author who writes historical, paranormal and fantasy romances, often combining the sub-genres. She lives in a small town in the Ozark Mountains with her husband and dogs. When she's not writing or reading, she hikes in national parks and conservation areas.

Allison graduated from College of the Ozarks in Point Lookout, Missouri with a B.A. in mass communications that's gathering dust after it was determined that she's better at writing fluff than hard news.


Pinterest - http://www.pinterest.com/allisonmwrites/
a Rafflecopter giveaway
Posted by Kay LaLone at 2:30 AM