My Review Of Chase Tinker And The House Of Mist 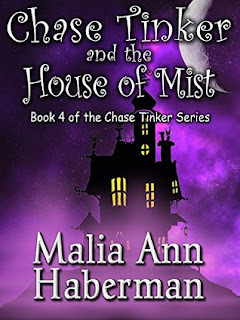 In Chase Tinker's world, magic, lies and secrets can be a lethal combination…
Everything is on the line for Chase Tinker: his family, his friends, his house, his magic…his life. Will destiny be on his side at last? Will the Marlowes finally be defeated—and at what cost? The Final Showdown. Who survives?

My Review Of Chase Tinker And The House Of Mist:  I loved this book. I had the privilege to read all four books. Chase and the rest of the characters are such great, fun characters. I have enjoyed reading how Chase discovered magic and how he has grown through each book.  In this book I was sad when Chase's grandfather died, but Chase became the keeper of the Tinker house which gave him more magical powers. Would that magical power be enough to defeat the Marlowes and find the Tinker's magical house? Magic. Adventure. Danger. I can't say enough good things about this series. Thanks, Malia, for an awesome read. I really enjoyed this series.
I received this book free for an honest review. 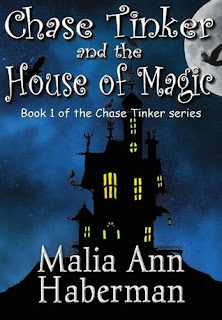 In Chase Tinker's world, magic, lies and secrets can be a lethal combination...
Thirteen-year-old Chase Tinker can't understand why he has the power to move things with his mind. Besides that, his dad has been missing for over a year, causing his mom to be too upset to pay much attention to her sons, so now he's been busted for shoplifting. As if this isn't enough to worry about, his younger brother Andy suddenly has a weird magical ability too. Can things get any crazier? Chase thinks. Then, a grandfather they thought to be long dead arrives at their door. He wants Chase and Andy to come visit him so they can learn about their supernatural heritage, and why they have magical powers in the first place. The boys soon find out that Grandfather, along with their cousin Janie, lives on a remote island in the middle of Puget Sound in an out-of-this-world house where fantastic magic can be found in practically every room, stairway and corridor. Chase can't believe their dad has been keeping so much from them. It's an even bigger shock when Chase learns that all their magic is controlled by a powerful and mysterious Relic in the attic, and if anything happens to this Relic, every bit of Tinker magic will be lost forever. He's even more disturbed when he learns his family has a dark and powerful enemy that is determined to steal all their magic, their house and their Relic. Now Chase must find a way to stop these evil beings, while at the same time figuring out what has happened to his dad, unraveling even more Tinker lies and secrets and not letting on that he has a huge crush on the housekeeper's daughter. 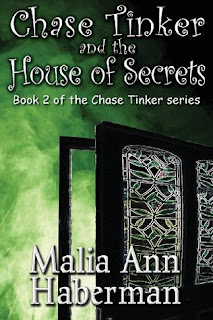 In Chase Tinker's world, magic, lies and secrets can be a lethal combination...
After spending the summer at his grandfather's gigantic, incredibly magical house, thirteen-year-old Chase Tinker thought things couldn't get any more bizarre, or that the secrets and lies couldn't get any worse, but he was wrong.As summer turns into Autumn, join Chase and his family for even more magical craziness in this exciting sequel to "Chase Tinker and the House of Magic." Craziness that will include: the sneezing of strange powers, the reappearance of the evil Marlowe family, another frightening kidnapping, the discovery of a mysterious, magical Japanese-American girl, a dangerous rescue mission, and a secret so mind-boggling, it will lead to a shocking climatic finish that will turn Chase's world completely upside down and leave him feeling like one of the worst people on the planet 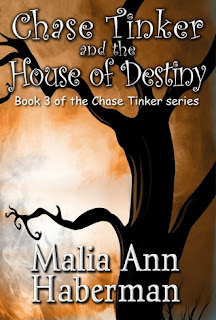 In Chase Tinker's world, magic, lies and secrets can be a lethal combination… For eight agonizing months Chase Tinker's guilt over the despicable act he committed on Halloween night has been eating away at his heart and mind. Chase's life gets even more complicated when secrets about the mysterious Relic in the attic are revealed, right before an unwelcome caller arrives on the day of Chase's fourteenth birthday! Despite his problems, his biggest concern is that his family's Dark Enemy, the Marlowe Family, is becoming more powerful with each passing day, fueled by the energy they continue to pillage from the many magical beings of the world. If Chase and his family are ever going to win, they will need a whole lot of magical help; they must destroy the most evil threat the world has ever known!
Posted by Kay LaLone at 2:30 AM No comments:

Hi,
Thanks for stopping by my blog. Today I thought I would share the first chapter of a work in progress, Mysterious Visions.  Remember as you read chapter 1, that this is a work in progress. There will be mistakes. This chapter will go through more revisions.
Thanks,


“I’ll look into it.” Grams blue eyes swam with worry. “Why after all these years are you having a vision of the car accident? I fear it can only mean trouble.”
Posted by Kay LaLone at 2:30 AM No comments:

On my blog today I have my good friend Thomas Patrick Henry from Family Secret.

What is your name?
Thomas Patrick Henry.  Most people call me Tom. My mom was the only one to call me by my full name.

2.   How do you envision your future?
Hopefully, demon free, but I've got a feeling that won’t happen. I plan to reopen my mom’s antique shop the Cat’s Meow. Work there for a while.

3.  Do you believe in magic? Why? Or why not?
When my mom first gave me the amulet and told me it might have magical powers, I thought she was crazy.  I didn't believe in magic. Magic was something for little kids to believe in. But I was proven wrong when I came face to face with a demon. Now I’m a firm believer in magic.

4.  What is your favorite sport?
Baseball. There is no doubt baseball is my favorite. Go Cubs. When I was young I used to play little league. And one summer I went to baseball camp which was lots of fun.

5.  Do you have any hobbies?
I like to read and collect comic books. Also I have a pretty good bobble head collection. Mostly baseball and basketball players.

6.  What in your past would you like to forget?
My mother’s murder. That is something that will haunt me the rest of my life because she was killed by demons.

7.  Are you lucky?
Yes. I have good friends and a family that loves me.

8.  What makes you sad?
Death. It leaves a hole in your heart.  You know their spirit is still with you watching over you, but you miss their physical presence.

9.  What is your pet peeve?
Being called a kid, especially by adults. I feel when they call me kid they are looking down on me like I don’t know anything because I’m young.

10. Do you have a girlfriend?
Yes. Her name is Sarah.  Her, Rob, and I have been summer best friends for a long time. And then suddenly the magic of love happened. 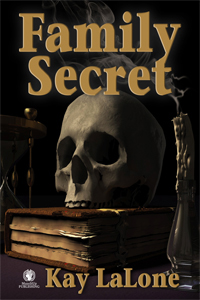 Mother Daughter Book Reviews is pleased to be coordinating a Book Blast for the newly-released board book, "This Little President: A Presidential Primer" by Joan Holub and Daniel Roode.

Book Description: A board book primer on presidents Learn about the US presidents with this bright and playful board book! Highlighting ten of the most memorable presidents—and featuring all forty-four on the last page—parents and little leaders-in-training alike will love sharing this fun primer full of age-appropriate facts, leadership skills, and White House history.


Leading our country. Helping you and me. Keeping all fifty states safe, happy, and free. Little presidents have a great big job.

About the Author: Joan Holub

Prize: One winner will receive a $25 Amazon gift card or $25 PayPal cash prize, winner's choice Giveaway ends: January 26, 11:59 pm, 2016 Open to: Internationally How to enter: Please enter using the Rafflecopter widget below. Terms and Conditions: NO PURCHASE NECESSARY TO ENTER OR WIN. VOID WHERE PROHIBITED BY LAW. A winner will be randomly drawn through the Rafflecopter widget and will be contacted by email within 48 hours after the giveaway ends. The winner will then have 72 hours to respond. If the winner does not respond within 72 hours, a new draw will take place for a new winner. Odds of winning will vary depending on the number of eligible entries received. This contest is in no way sponsored, endorsed or administered by, or associated with Facebook. This giveaway is sponsored by Joan Holub and is hosted and managed by Renee from Mother Daughter Book Reviews. If you have any additional questions – feel free to send an email to Renee(at)MotherDaughterBookReviews(dot)com. a Rafflecopter giveaway