The Wrong One by K. C. Sprayberry 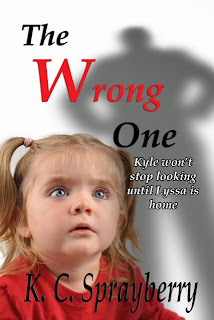 
One by one, the residents of Landry, Georgia gave up on finding Lyssa Winders alive. It had, after all, been fourteen years since she vanished. The men who invaded her home left behind the bodies of those she loved with all her heart. Only one person never gave up and still searches for Lyssa. Kyle Tinker battles his own demons from that night, when he hid like a coward instead of running for help. Their eighteenth birthday looms on the horizon, and Kyle is determined to bring Lyssa home.


Meanwhile, Kim Tinker is having trouble understanding her dreams about a pretty blonde girl—she has no idea that these dreams are of her life as Lyssa Winters. She also hears a guy who has recently started talking to her--in her head. All Kim wants is to get away from a family which hates her, but doing it safely is the one thing which eludes her.


On the day of the Freedom Festival, Kyle sees the girl he never thought he'd see again. And Lyssa finds the one person she's protected for the last fourteen years on their shared birthday.


Four-year-old Lyssa Winders landed with a thump on her living room floor. Her bottom hurt from the hard wood, and her head ached from all the yelling and shouting she'd been hearing. Nothing made sense. She just wanted this to stop.


Her parents, Auntie Keisha, Nana Brandy, and Grandpa Monty kneeled in front of her. They had their hands on the back of their heads, and they looked very scared.


"Gonna talk now, Jack?" the stinky man asked. He had carried her out of the safety of her bedroom and dumped her on the floor. "Or do I hurt your kid?"


Stinky jerked Lyssa to her feet. She couldn't run. He held her tight in front of his nasty smelling body.


"She's just a baby," Daddy said. "Don't hurt Lyssa. Let her go. She won't tell anyone anything." He stared at her with scared eyes. "Right, baby? You won't say anything." She nodded, and her daddy faced Stinky. "See, she agreed. Just let her go."


She turned her head and saw her puppy. Rags crept out from behind the sofa. His tail stood straight in the air, and he made growly noises in his throat.


Lyssa swallowed hard. Rags couldn't come any closer. Stinky had a gun. He had a horribly tight grip on her shoulder. 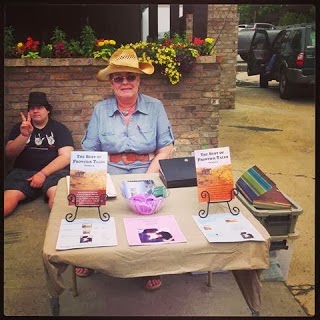 Bio: KC Sprayberry started writing young, first as a diarist, and later through an interest in English and creative writing. Her first experience with publication came when she placed third in The Freedoms Foundation at Valley Forge contest while in the Air Force, but her dedication to writing came after she had her youngest child, now in his senior year of high school.


Her family lives in Northwest Georgia where she spends her days creating stories about life in the south, and far beyond. More than a dozen of her short stories have appeared in several magazines. Five anthologies feature other short stories, and her young adult novel Softly Say Goodbye, released in 2012. During 2013, more young adult stories have been released: The Ghost Catcher, Who Am I?, Family Curse … Times Two, and Amazon Best Seller, Canoples Investigations Tackles Space Pirates, Canoples Investigations Versus Spacers Rule, Take Chances, Mama's Advice, Secret From the Flames, and Where U @.