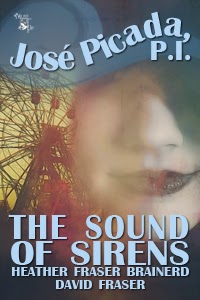 The Sound of Sirens (Book Two of the José Picada, P.I. Series)


Having narrowly survived an encounter with murderous black magic, private investigator Josie P. Cates has settled into the humdrum life of her new profession. But she now faces a challenge far more terrifying: Thanksgiving week with her mother. Against all odds, the week proceeds nicely, at least until her friend Arthur disappears at the amusement park run by country music star Tommy Thomas and reality television celebrity Ophie Sue Rail. With help from her on-again-off-again boyfriend, her overly-peppy stepsister, and a distant European cousin, Josie must not only rescue Arthur, but unravel the ancient mystery that links Tommy and Ophie Sue.

Tell us about your book and how the story came to be.

Dave: I'm constantly on the lookout for inspiration for some future project. In this case, it happened at Walt Disney World in Orlando. The PeopleMover ride goes through the Space Mountain indoor roller coaster and, for a few minutes, it's pretty darn dark. This led directly to the use of an amusement park in our new book, The Sound of Sirens. You'll have to read the book to find out why. That sounds like a pathetic attempt to get people to buy the book. So if you don't want to buy the book, but want to know how the PeopleMover figures in, get in touch with me on Twitter. At the time I write this, I don't have a Twitter account. Hopefully I get one before this interview is posted.

Heather: I have a Twitter account, but the PeopleMover story is way too long for 140 characters. But you can send us a message on Facebook (the link is below) and we’ll tell you the whole tale. In addition to being set in a theme park, The Sound of Sirens takes place at Thanksgiving time. Main character Josie Cates, while on vacation during the holiday, runs into paranormal shenanigans. Yup, that’s just her luck!

Dave: I would say female, woman, and lady. I mean "lady" in the biological sense, not the "classy person" sense. I think if Josie caught me calling her a classy person, she'd punch me.

Heather: I would say smart, stubborn, and kind of a goofball. She’s a newbie private investigator, and very fun to write. I miss Josie when working on other projects.

Do you have a method for creating your characters, their names and what do you think makes them believable?

Dave: We usually don't create characters before they're needed in the story. Typically, they show up out of nowhere. Their names are normally just the first thing that pops into my head. Sometimes the names might change later on if something better comes up. As for making them believable, a heavy dose of autonomy usually does the trick. Let them make their own decisions.

Heather: We love seeing where our characters take us.

Do your characters follow your plot path or do they take on a life of their own? Do you keep them in check?

Dave: Keep them in check? Hardly. We have a general destination in mind for the plot and turn our characters loose. The wilder the ride, the better.

Heather: I think Mr. Toad would be proud of us. (Another Disney reference, for those of you unfamiliar with Mr. Toad’s Wild Ride.)

Have you ever suffered from writer’s block? If so, how did you overcome it?

Dave: All the time. I have two methods for solving the problem. The first is to call Heather and talk it out. I can't tell you how many times I've come up with the answer just by talking about it out loud. The second method is to... darn. For the life of me, I can't think of the other way. Let me give Heather a quick call and I'll figure it out.

Heather: Ha! Yes, talking it out between the two of us is how we usually solve writer’s block, whether it’s in regard to a co-authored piece or one of our solo projects.

What types of books do you like to read?

Dave: I'll read pretty much anything. My current reading pile (some of which I've actually found time to start) includes The Third Bullet by Stephen Hunter, As I Knew Him by Anne Serling, Seabiscuit by Laura Hillenbrand, and A Comedy of Terrors by Graeme Smith. So just right there we have a Thriller, Biography, History, and Fantasy. If I could round this list off with a Teen Paranormal Romance, I'd have just about everything.

Heather: I gravitate toward mysteries and fantasy, though I’ll give just about anything a try. And I’d be happy to loan you Dream Shade, Dave!

What do you like to do when you aren’t writing?

Dave: Vacuuming and watching baseball. Now that the World Series is over, I have a lot more time for vacuuming. True story: I asked for a carpet shampooer for my birthday. It's so much fun.

Heather: I asked for a Dyson vacuum for Christmas one year. Love it! Aside from cleaning the house, my downtime is spent reading, walking my crazy dog, and hanging out with my three boys. Oh, and I travel as much as possible!

What’s next for your writing? Are you working on a new story?

Dave: We're currently working together on the next José Picada book and a MG fantasy book. On my own, I'm still trying to finish my noir detective novel from NaNoWriMo (National Novel Writing Month) last year.

Heather: I’m revising last year’s NaNo book, too. It’s Chick Lit, a genre I’ve never delved into before, which is fun. I work on that one when Dave is in possession of our co-authored projects. It’s nice to switch back and forth between a co-written book and a solo project. You get to look at each manuscript with fresh eyes every time you get back to it.


Dave: Pretty much anything Stephen King put in On Writing. Anything from the writing section, that is, not the autobiography part. I think "Don't get hit by a car" is rather obvious.

Heather: Yes, that does sort of go without saying.

Where can readers find you and your books?

Dave: I'm usually at home in Upstate New York. Most of my books are on the bookshelves in my basement. A few are on the nightstand by my bed.

Heather: As the self-appointed Social Media Manager of Brainerd & Fraser, I have a real answer for you (though I like Dave’s take on it). You can find us on:

You can find our books on:

I give this book a five star review. I loved it. Josie is a strong, fun character.  She doesn't give up easily. The mystery is captivating with a great ending. I can't wait to read more of Josie's mysteries. Thank you, Heather and David, for a good read.


Leave a comment below for a chance to win the prize of your choice! If your name is randomly selected, you’ll get to choose one ebook from the José Picada, P.I. Series: Deception Al Dente (book one) or The Sound of Sirens (book two).

Leave a comment. You won't be disappointed in these books. Thanks.
Posted by Kay LaLone at 2:30 AM