For The Sake Of Revenge by DL Atha

Title: For the Sake of Revenge


How far was Tamara willing to go for the sake of revenge? And who would pay the price? She didn’t know as she tipped the bottle of vampire blood up to her lips but she was about to find out.
Stepping off the ferry in Sitka, Alaska was bittersweet for Tamara Semenov. A decade earlier she had abandoned her mother and high school sweetheart, Peter, to marry a man she hardly knew only to find herself in an abusive relationship. Now ten years later, she had escaped with her life but at what cost. Her mother was dead.
Although the police had ruled her mother’s death an accident, Tamara was convinced her estranged husband was to blame and to make matters worse, she knows she is his next target.
While putting her mother’s affairs in order, Tamara finds the blood of a vampire named Adrik, who as a human was falsely accused of raping a wealthy Russian heiress and excommunicated from the Church. For the sake of revenge, he willing condemned himself to vampirism.
Learning that the blood could tie the living to the undead, Tamara seeks out a connection with the long buried vampire in hopes of striking a deal, his freedom for her revenge. Will he be the edge she needs to out maneuver her estranged husband or will she become entangled in a two century old web of revenge? 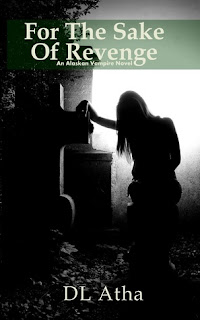 
DL Atha, having the good fortune to have been raised in rural western Arkansas, resides there still with her husband and three children where together they enjoy the farm life.
She earned her MD in 1999, and currently enjoys the practice of hospital medicine and wound care which she performs full time in a nearby town.
She is currently working on the sequel to Blood Reaction.
For the Sake of Revenge was her first venture into non-medical fiction.