The Cats Of Cullaby Creek By Kimbra Kasch

THE CATS OF CULLABY CREEK

Think “The Animorphs” Grown Up 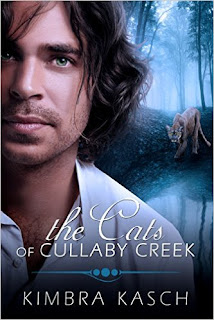 LOVE IS ALWAYS RISKY
BUT
IN CULLABY CREEK IT’S DANGEROUS

IS IT ALREADY TOO LATE FOR SAVANNAH?
FIND OUT IN THE CATS OF CULLABY CREEK

When Savannah meets Kyle, its love at first sight. And why wouldn't it be? He's perfect, as far as she can tell. But Kyle appears whenever things go wrong. Maybe he isn't everything she thought he was. It's a complete mystery until she discovers the water in Cullaby Creek is being bottled and sold as vitamin “infused” water. Mistic Water promises the impossible. And then, like a magical elixir, it delivers. People who drink it feel younger, smarter, faster...healthier. But it doesn’t take long before side effects hit. Literally. The secret has to be in the water…or is it something more?

Here is a sneak peek at Kimbra new book coming out next month.

Summary of Morgaine Le Fay and the Viking
This is an old story told from a totally different perspective. This is a Viking’s tale.
MORGAINE Le FAY AND THE VIKING is a legendary romance filled with honorable Knights from King Arthur’s Round Table, Salacious Pirates, and Brutal Vikings. This is the retelling of the romance between King Arthur’s half-sister, Morgaine Le Fay, and her epic lover, the Viking Prince of Denmark and heir to King Geoffrey’s throne, Holger Danske. And though you might think you know these characters from the British stories, this tale comes from an entirely different point of view. The Viking perspective.
Everyone knows of Excalibur and King Arthur but few know of his brother-in-law, the Danish Viking Prince and warrior Holger Danske or his sword Cortana. MORGAINE Le FAY AND THE VIKING is a Young Adult retelling of folk-lore legend and Danish leader, Holger Danske, and his magical romance with the sorceress Princess Morgaine Le Fey.
They met on a battlefield, poised against each other, but their attraction was more powerful than any sword, stronger than any warrior and more magical than Merlin, yet theirs is a tale more tragic than Romeo and Juliet.
Weaving the stories from English, French and Danish together this is one slice from the rich tapestry of tales that have come together throughout time and history.
While most everyone who searches for tales of the middle ages and seeks out stories of Knights and battles, castles and magical swords, they will only find the stories of King Arthur and his Knights of the Round Table. Yet, it is only with the help of the Viking warrior Holger Danske of Denmark and Charles the Great (a.k.a Charlemagne of France) that King Arthur beat back the Saxons and retained leadership of Camelot.
Amidst these battles and legends, Morgaine Le Fey is worthy of her own stand-alone stories for she was such a strong woman everyone believed her to be a sorceress or more than human. Some said she was half fairy because she rode with the men in battle and was more than willing to take enormous risks for the men she loved.
Some believe she was the most powerful sorceress in all of history, having tutored under the guidance of Merlin and quickly surpassing his abilities. But it is her tragic love story with the Danish Prince that forms this first story in the Viking Series: MORGAINE Le FAY AND THE VIKING.
Morgaine’s lover, the Viking Norse leader and legendary warrior, is immortalized in stone in the dungeons of Hamlet’s Castle on the shore that sits between the sound of Denmark and Sweden.
But there is much more to this tale than a simple love story.
King Arthur received his magical sword, Excalibur, from the Norse Goddess, also known as The Lady of the Lake but Excalibur was not the only magical sword she ever relinquished to mortal hands. She gave just such a magical sword to the Danish Prince, Holger, and one to the French King, Charlemagne. Together these three heroic men joined forces to fight side by side. Britain, France and Scandinavia battled back the invading Saxons.
I am married to a Dane who was born and raised in Denmark, and have visited the Castle of Kronborg in Helsingør, Denmark and viewed the statue Holger Danske in the casemates. I have also visited both England and France and tried to stay true to the themes of all three legends, (from Denmark-Holger Danske, England-King Arthur, and France-Charlemagne), while weaving them together. However, I have taken artistic liberties with language and in dramatizing the tale of MORGAINE Le FAY AND THE VIKING.
There is an entire world full of rich stories about epic battles that go far beyond King Arthur’s realm and other countries hold their legendary heroes in this same high regard. This is one such story.


Linkedin:  https://www.linkedin.com/profile/view?id=AAIAAAGF2pwBVg-AKJf0oZ1xQgzY1oFTZ2yaAcY&trk=nav_responsive_tab_profile_pic
Posted by Kay LaLone at 2:30 AM