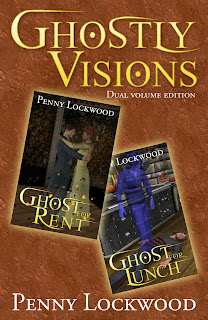 Wendy Wiles attracts ghosts, first in Ghost for Rent, when her parents separate and she, her brother, and mother move into a haunted house. The story begins in Portland, Oregon and quickly moves to small town, Scappoose, Oregon. Miserable at leaving her friends and beloved Portland behind, Wendy meets her neighbor Jennifer who tells her the house Wendy’s mom rented is haunted. After two of them appear to Wendy, the girls find themselves tracking down the mystery of who the ghosts are and why they "live" in the Wiles' home.

In Ghost for Lunch, Wendy’s friend, Jennifer, moves away, leaving Wendy sad until new neighbors and their restaurant in St. Helens bring ghosts back into Wendy's life. She, her brother, and their new friend discover the two cases are connected. Once again, the young sleuths use clues and lots of brainstorming to figure out who is haunting the restaurant.

While on the surface, these two stories appear to be about ghosts and the mystery of solving them, they are also about the importance of family and friends and working together to solve a problem.

My Review:  Great fun characters. Wendy is scared at first when she learns her house is haunted. Ghost aren't real her mother says. Wendy is determined to help solve these ghostly mysteries. In the first book she helps the ghost haunting her home. In the second book she helps ghost haunting a restaurant. Her brother Mike might pick on her like brothers do, but they learn to get along. Good book about ghosts, family, and friendship. Thanks, Penny, for a good read.

Ghostly Visions, published by 4RV Publishing, is a two-for-one edition of Ghost for Rent and
Ghost for Lunch. Hardshell Word Factory originally published the first of the stories in 2002.
I had been writing short stories and non-fiction articles for close to five years when my young
daughter told me she didn’t think I was a “real” writer since I hadn’t written a book.  To
challenge myself and to see if I could, I decided to write a children’s novel.  A neighbor told
me about hearing a piano playing in her rented farmhouse.  The idea intrigued me and I thought a
mystery about ghosts might appeal to the middle grade readers.  Hardshell eventually went out
of business, and I got my rights back.

I had a lot of fun writing Ghost for Rent. After I got my rights back, I decided to write another
novel using most of the original characters.  I read an article in our local paper about a restaurant
in a neighboring town that was reported to be haunted.  This seemed the perfect spot for a sequel.
When I approached 4RV with Ghost for Lunch, advising them there was another in the series, they decided they wanted the first story as well and put together the two-for-one package.

3.   Do you have a method for creating your characters, their names and what do you think
makes them believable?

When creating characters, I usually think about the people I know.  I then take character
traits from different people and combine them to create a unique individual.  I have used
different methods for choosing names.  Sometimes I hear a name I like and I jot it down to
use later in a story.  I have used web sites of popular baby names.  I worked for a few years
with an agency that dealt with juveniles and I often made note of unusual names that appealed
to me.
In order to make my characters believable, I try to give them little quirks.  For example
in Ghostly Visions, Wendy, my main character, likes to write poetry. I make sure the characters
aren’t perfect and have faults.  Wendy’s brother, Mike, loves to torment Wendy about everything
from her name to her obsession with ghosts.  I dress my characters according to what is popular
for the area of a country and time period.  Ghostly Visions takes place in a small rural community
during the early 1990s and I tried to be true to that when crafting my characters.

4.       Do your characters follow your plot path or do they take on a life of their own?
Do you keep them in check?

When I start a story, I have a general idea of what I want to write about.  For example, in the
Ghost books, I knew I wanted a mystery that centered on a haunting.  I didn’t know how the
ghosts would communicate with Wendy until they made their appearance.  I didn’t know what
Wendy would do to solve the mystery, until she found the clues.  That said, I guess my characters
tend to have their own lives and I let them do that.  The only time I might keep them in check
would be if they got themselves into some sort of pickle that couldn’t be fixed.

I’ve heard it said there’s no such thing as writer’s block.  I do think there are times when it’s
harder to write than others.  I’m afraid I’m not the type of writer who feels I must sit down
each day at the same time and write in order to call myself a writer.  I allow myself to take a
break if I’m not in the middle of a project.

I have, however, over the years, developed a technique that keeps me busy when I want to be.
Since I am a versatile writer, I can write non-fiction articles about parenting, writing, or teen
self-help.  I’ve done grantwriting. I can write a children’s book or short story.  Or, I can write
adult fantasy, soft science fiction, or romance, or a combination of those genres. Having that
ability allows me to work on something different if I’m stuck with what I’ve been writing.

I have read a great deal of fantasy and science fiction over the years.  I also belong to a
women’s book group, and so I read books outside my comfort zone and have found many
I've enjoyed that I wouldn't have normally chosen to read.

I have three delightful grandchildren and enjoy spending as much time as I can with them.
I do a lot of reading (what writer doesn’t?). I love spending time in both my flower and
vegetable gardens during the spring, summer, and fall.  I enjoy walking and water aerobics.
I also do quite a few crochet projects, mostly for my grandkids.

Truthfully, I am on a break right now.  I have been thinking of another Ghost story and have
written a couple of preliminary chapters.  I thought I’d see how well Ghostly Visions is
received before getting fully committed to it.  We have a lot of ghosts it seems in our area.
This story would also be based upon a newspaper article about a former craft supply story t
hat was haunted.

Don’t give up. When I first started writing, the support systems in place now weren’t available.
I had no idea of where to submit my work and no one I could ask.  I, of course, sent stories off
to high-end magazines I read as a teenager. I gave up feeling completely rejected.

Only much later in life, after I’d been grantwriting for a couple of years, did I learn that one
should start small and work up to the bigger markets. Once I figured that out, I began selling
stories and articles on a regular basis. I often found one editor might not like the story or article
but another would love it.  It was all about being in the right place, at the right time, with the
right story.

10.       Where can readers find you and your books?
My web page is http://pennylockwoodehrenkranz.yolasite.com.

My romances, Love Delivery, Lady in Waiting, and Mirror, Mirror, are with MuseItUP
Publishing, and all currently discounted: https://museituppublishing.com/bookstore/index.php/search?keyword=penny+ehrenkranz&limitstart=0&option=com_virtuemart&view=category .

My collection of science fiction and fantasy short stories, A Past and A Future, is available
from Alban Lake Publishing: http://store.albanlake.com/product/a-past-and-a-future/ 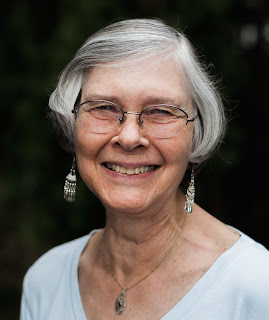 Penny Lockwood (Ehrenkranz) has published over 100 articles, 75 stories, a chapbook, and her stories have been included in two anthologies. She writes for both adults and children. Her fiction has appeared in numerous genre and children’s publications, and non‑fiction work has appeared in a variety of writing, parenting, and young adult print magazines and on line publications.  She is a former editor for MuseItUp Publishing, 4RV Publishing, and Damnation Books.  Visit her web site at http:// pennylockwoodehrenkranz.yolasite.com and her writing blog at http://pennylockwoodehrenkranz.blogspot.com/.

4RV Publishing has joined her two middle grade novels (Ghost for Rent and Ghost for Lunch) as Ghostly Visions. She recently released Boo’s Bad Day with 4RV Publishing and has one other children’s picture book under contract with them: Many Colored Coats. She has three romances published by MuseItUp Publishing: Love Delivery, Lady in Waiting, and Mirror, Mirror. Her short story collection, A Past and A Future, is available through Alban Lake Publishing and Smashwords.
Posted by Kay LaLone at 2:30 AM