My Review Of School Of Deaths and Sword of Deaths 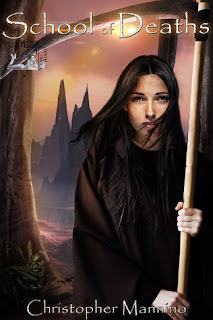 Thrust into a world of men, can a timid girl find bravery as the first female Death?
Thirteen-year-old Suzie Sarnio always believed the Grim Reaper was a fairy tale image of a skeleton with a scythe. Now, forced to enter the College of Deaths, she finds herself training to bring souls from the Living World to the Hereafter. The task is demanding enough, but as the only female in the all-male College, she quickly becomes a target. Attacked by both classmates and strangers, Suzie is alone in a world where even her teachers want her to fail. Scythes hungry for souls, Deaths who subjugate a race of mysterious magicians, and echoes of an ancient war with Dragons.As her year progresses, Suzie suspects her presence isn't an accident. She uncovers a plot to overthrow the World of Deaths. Now she must also discover the reason she's been brought there: the first female Death in a million years

My Review:  "It is no accident that you're here." "But I belong in the living world," insisted Suzie.
Suzie is such a great character. She is thrown into a world she knows nothing about and never thought existed. She meets new friends, solves a mystery, and discoveries who she really is.
This world didn't frighten her anymore. Even if she ever saw her parents again at least she was where she belonged. 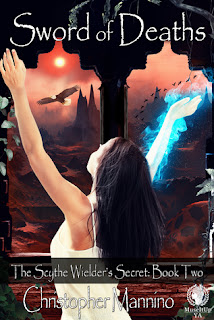 THE SCYTHE WIELDER'S SECRET CONTINUESSusan Sarnio made a choice, and will spend the rest of her life as the only female Death. Last year she was bullied and ostracized. Now, to her complete bewilderment, four Deaths vie for her affection. Yet, something is terribly wrong at the College of Deaths. When a ship carrying scythe metal is attacked, many blame the newly-freed Elementals, but Susan knows the Elementals are innocent. Shadows from the distant past come to light. Dragons circle the horizon, blood spills, and nothing is what it seems. Susan and her friends struggle to stop a war. They search for the fabled First Scythe, hoping to sway the balance, but who is the true enemy?

My Review:  Suzie changes her name to Susan to show she is more grown up. The World of Deaths has become her new home. She has friends and a chance at romance. But this new world holds many dangers for Susan like male deaths harassing her to Sindril and dragons threatening her life. Can't wait to read book three. Thanks, Chris, for a good read.
Posted by Kay LaLone at 2:30 AM