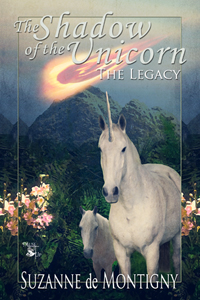 Hi,
Today I am interviewing Suzanne de Montigny the author of The Shadow Of The Unicorn The Legacy to be released Nov 30 by Museituppublishing.

Suzanne de Montigny wrote her first unicorn novel when she was twelve and has always kept it in a safe place. In her twenties, she freelanced as a composer and pianist in Vancouver, B.C. Later, she began teaching elementary music where she learned she could spin a good tale that kept kids and teachers begging for more. She has written four novels. The Shadow of the Unicorn: The Legacy is her first. Living in Burnaby, she resides with her husand and her two boys.


Tell us about The Shadow Of The Unicorn: The Legacy and how the story came to be.

The Shadow Of The Unicorn: The Legacy came about in a strange sort of way. When my father died, six years ago, I was stricken by an intense urge to write. A year later, I found an old box of childhood memorabilia while cleaning the basement. And in that box, I found the first four chapters of a rewrite of my grade six unicorn story that I must have done somewhere in my teens. I threw it in the recycling box, along with all the rest of my garbage, but a couple of days later, on a rainy afternoon, my curiosity got the best of me, so I brought it back in, dried it off, and read it. I was utterly fascinated. A week later, I sat down and wrote the first draft, then a month later, a second novel. And I’ve never stopped.

What types of books do you like to read?
Anything that takes me away from my real world. Thus fantasy, historical fiction, science fiction, that sort of thing.

What do you like to do when you aren't writing?
My boys and I fiddle. If I’m not writing, I’m either playing music or helping the boys with their
homework.

What's next for your writing? Are you working on a new story?
I just recently completed a YA Paranormal entitled: A Town Bewitched about a fourteen-year-old child prodigy in classical violin who struggles to survive in the small town of Hope, British Columbia. When a fiddler bewitches the town, only the girl suspects it’s her who has been vandalizing the town, leaving tokens of dead and gutted birds. I’m also rewriting the second of The Shadow of the Unicorn trilogy.

Where can readers find you and your books?
From Muse It Up Publishing and Kindle.

Anything else you want readers to know?Yes, the most important part of all. Last July, I was stricken with a visual impairment for which I’ve been undergoing numerous tests. At present, my ophthalmologist feels it’s only temporary and will clear itself up in time. But it got me to thinking there are countless people in the world, who have no hope for their vision. And so, I decided that half of all my proceeds from the The Shadow of the Unicorn: The legacy will go to the Third World Eye Care Society, a group of eye specialists who travel to underdeveloped nations, bringing thousands of pairs of used glasses and operating for free.

Check out Suzanne's book trailer, It is very powerful
http://youtu.be/St9OsyK974o

After checking out the book trailer go over to MuseItUp and order the book.
https://museituppublishing.com/bookstore2/index.php?page=shop.product_details&flypage=flypage.tpl&product_id=466&category_id=69&manufacturer_id=230&option=com_virtuemart&Itemid=1

Thank you Suzanne.
Posted by Kay LaLone at 3:40 AM